This mixed-use building was originally a dairy. Music rehearsal studios now occupy the lower level of the building. The upper floor has a trade bindery, plumbing company, and an alcohol and drug-testing center. The building has two service elevators, ample parking, and easy access to the Beltline and the downtown. Located next to Wingra Creek and bike path. Close to various restaurants and grocery stores. Rehearsal space and music studios vary in size and price. 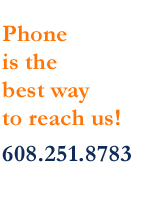